Hidden underneath the Naryn-Kala fortress in Derbent, Russia, is a mysterious subterranean vault – a buried structure whose original purpose has been unknown for decades. Now, thanks to clever use of scanning technology, we might finally know what the building is.

As they pass through the space, nuclear emulsion plates are used as detectors to ‘catch’ the particles and develop an image of where the muons passed through, and where they were absorbed or deflected. (This same method has been used on pyramids in Egypt before.)

By using this method to meticulously scan the subterranean structure, the team arrived at a suggestion it was once a vast church.

In fact, it could be the oldest church in Russia, dating from around 300 CE.

Until now, archaeologists had been split over whether this is the site of a church, a reservoir or water tank, or perhaps a Zoroastrian fire temple. Now, thanks to the new measurements, it seems that first hypothesis has taken the lead in terms of probability. 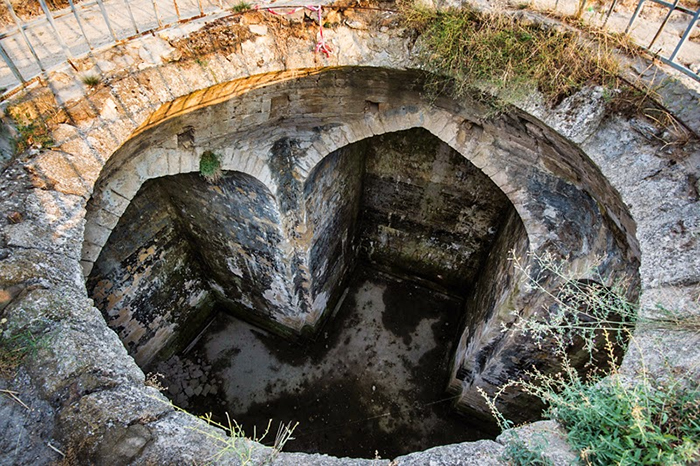 The view from above ground. (NUST MISIS)

“The unusual building, in which we have put our detectors, has the shape of a cross, oriented strictly to the sides of the world,” says physicist Natalia Polukhina, from the National University of Science and Technology (MISIS) in Russia.

“One side is two metres [six-and-a-half feet] longer than the others.”

Scientists can’t excavate what lies beneath the Naryn-Kala fortress because it has UNESCO cultural heritage site status (only a small fragment of its dome is above ground). Instead, they lowered detectors into the depths of the structure and spent four months scanning the internal dimensions.

The building appears to be around 11 metres (36 feet) high, 15 metres (nearly 50 feet) from north to south, and 13.4 metres (nearly 44 feet) from east to west. The dome is located at the centre of the cruciform design.

While the site has been referred to as a water tank – and was probably used for that purpose in the 17th and 18th centuries – the differences between this and another nearby reservoir suggest the building wasn’t originally used for storing water.

“It seems very strange to me to interpret this building as a water tank,” says Polukhina. “In the same fortress of Naryn-Kala, there is an equal underground structure of 10 metres [nearly 33 feet] depth, and it really is a tank. This is just a rectangular building.”

How the structure is thought to look. (NUST MISIS)

It’s thought that the building was buried by the Sasanian Persian Empire after it took control of Derbent around 700 CE – the area is part of a crucial trade route between Europe and the Middle East and has always been important strategically.

The scan also revealed an unusual build-up of muons in the western wing, perhaps indicating particular architectural features that have been preserved and could eventually be scanned in detail using a similar non-invasive approach.

Now the researchers want to continue their work with further scans to produce a full-size image of what’s buried under the ground at the Naryn-Kala fortress.

Before too long we might be able to say for certain what this ancient structure was originally built for.

“It is strange,” says Polukhina. “Currently, there are more questions than answers.”

The research has been published in Applied Sciences.