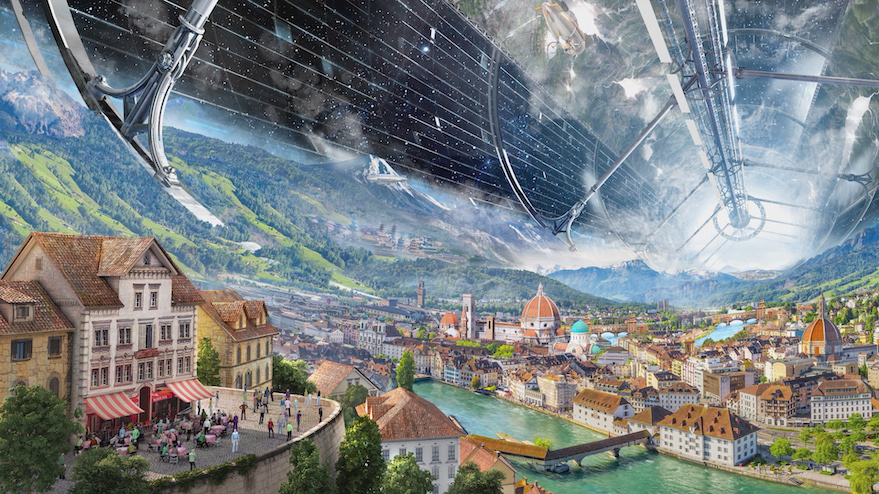 Those who watched the full 51-minute version of Jeff Bezos’ May 9 Blue Moon announcement were treated to a tutorial on the work of Dr. Gerard K. O’Neill. In the 1970s Dr. O’Neill popularized the idea of space colonies that rotate in orbit allowing tens of thousands of inhabitants to live comfortable lives in Earth-like habitats. Bezos even commissioned updated renderings to excite the audience’s imagination.

Bezos articulated, as he has on many occasions that human civilization should and must expand out into the space to live and work in permanent space settlements. Doing so will allow the best planet in the Solar System, the Earth, to become a protected treasure in the vast harshness of space.

He understands that by creating the infrastructure to accelerate economic development in space his vision of space settlement will more rapidly come to fruition. But Bezos is sober about his space colony ambitions. He calls it a multigenerational endeavor. And so it may be.

But just as Bezos, and others like him, are pushing the envelope of technology and business models, there is a similar need to push the limits of space policy such that it will support a space settlement agenda. There is a very real opportunity to develop more impactful policies that will both enable and encourage the development of space settlements. But the pro-space settlement folks in the space policy arena must be willing to pursue them. A comprehensive space settlement policy agenda that lawmakers and advocates would be able to get behind would include the following focus areas:

A formal declaration of national commitment to space settlement has real potential value.

For example, Send. John Cornyn (R-Texas) and Gary Peters (D-Mich.) introduced the Advancing Human Spaceflight Act that among other things will set space settlement as a clear national goal. Last year, a similar language was included in the Senate NASA Authorization bill but was stripped out in the House-Senate compromise bill.

But a pronouncement is not enough. In 1988, as a staffer to Rep. George E. Brown, Jr,  I helped write and pass into law the Space Settlement Act (P.L. 100-685 Sec. 217) which declared that the extension of human life into space leading to space settlement fulfills the purpose of science, exploration and commercial development, and will enhance the general welfare. Lacking buy-in from NASA, however, the reporting requirements in this law were quietly ignored.

Goals are critical, but they must be accompanied by specific enforceable actions or they will have little effect.

Clearly, we still have a long way to go technological before we can launch a space settlement project. We need policies that require NASA and other agencies to engage in specific technology research and development efforts essential to space settlement viability. Much of this work is underway as it relates to long duration human spaceflight research. Research on the effects of radiation exposure and micro- and low-gravity are on-going. Other related research included in-situ resource utilization for propellant and construction; mineral deposit assessment; topography for site selection; and autonomous robotics. All these areas have room for greater funding and attention.

There is an open question as to whether international space law is flexible enough to permit an entity, or consortium of entities, to construct a space settlement at will. An evaluation of any barriers that might exist or arise, and consideration of policy solutions must be explored and crafted.

One way that a government can demonstrate its seriousness about developing and promoting space settlement is to create positions and divisions that are dedicated to this goal. In the U.S., we envision a coordinated, multiagency effort to support space settlement development. Legislative action will be required to create these implementation bodies.

Government can help to make investment in space settlements attractive through tax breaks, property rights, grants, public private partnerships, guaranteed loans, bond issues and other traditional and nontraditional financing mechanisms. Government and prospective stakeholders could conceive a package of “win-win” options to make the financing of a space settlement a midterm, instead of long-term, reality.

Establishing guidelines and a permitting criterion would spur consideration and interest among prospective space settlement stakeholders. Serious investors and colonists will, at a minimum, appreciate and more likely insist that a government sanctioning regime be in place to add a high-level of confidence to any proposed settlement initiative.

The approval process should be as simple as possible. It should be limited to “protect international security and the public interest” and everything else is caveat emptor. It may include performance-based elements such as “habitats must remain in orbit for no fewer than 150 years without risk of deorbit” and it is up to the operator to prove to the approving authority how that will be accomplished. There will also be a need for an informed consent regime for occupants/visitors of a habitat.

Bezos and Musk and others have been taking bold steps to paving a technical path toward space settlement. Bravo! It is now time for those advocates in the space policy arena to become equally bold in advancing legislation that will also pave the way to a space settlement future. Join us June 5, 2019, for the Policy Forum on Space Settlement, hosted by the National Space Society, to discuss ideas and recommendations to ensure that when the day finally arrives when the space settlement technology, cost and investment all come into alignment, we will be ready with a set of sound policies that will ease the way to realizing this dream.

Steve Wolfe is SpaceCom’s deputy executive Director and chair of the SDC Policy Forum on Space Settlement. The views expressed in this article do not necessarily reflect those of the SpaceCom organization or its advisory board.