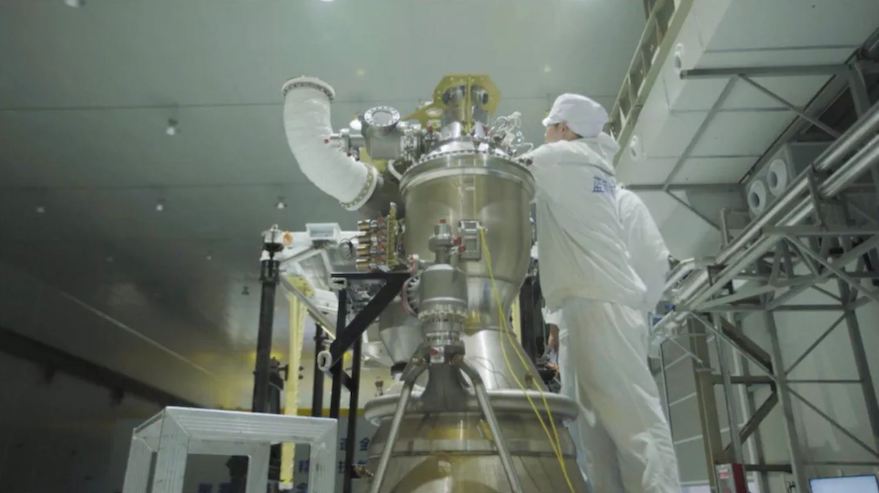 Assembly of the 80-ton thrust Tianque-12 methalox engine was completed at a manufacturing base in Huzhou, eastern China, following a successful power pack test in March.

The engine benefits from a modular and integrated design, according to a May 6 Landspace news release, helping to reduce the number of components and reduce costs. A hot fire test is expected before the end of June.

Landspace will use the TQ-12 engine for its Zhuque-2 (Vermillion Bird-2) medium-lift launch vehicle, which will measure 48.8-meters tall with a diameter of 3.35 meters. It will be capable of delivering a 4,000-kilogram payload capacity to a 200-kilometer low Earth orbit and 2,000 kilograms to 500-kilometer Sun-synchronous orbit.

The company claims the launch vehicle will be the first Chinese rocket powered by methalox propellant and will, upon its test flight expected in 2020, have the third-highest thrust level among commercial aerospace companies globally.

Mike Gruntman, a professor of astronautics at the University of Southern California, told SpaceNewsthat the TQ-12 engine development was a ‘big deal’, demonstrating that China has, “accumulated a critical mass in rocket technology and [is] capable of embarking on developments where they are blazing the trail rather than reproducing what had been demonstrated earlier.”

Gruntman states that a large methane-LOX engine was developed and qualified in the USSR in 1980s, but never flown, while Blue Origin’s BE-4 will soon be completed.

“Chinese methane-LOX engines will be part of a selected group who can, and soon will have, done it”, Gruntman states, signaling a mature program and broad capabilities.

Remco Timmermans, head of communications at Open Cosmos, told SpaceNews via email that the memorandum of understanding with Landspace is a reciprocal agreement aimed at the Chinese small satellite market.

According to Landspace the deals totaled $15 million. Open Cosmos stated that there is no mention of monetary obligations or targets in the MoU, while D-orbit had not responded to requests for comment by press time.

The agreements were signed at the Second Belt and Road Forum in Beijing in April and were nominally linked to the ‘Spatial Information Corridor’ dimension of the wider Belt and Road initiative, a massive development strategy launched by China in 2013.

Landspace had previously signed a contract with Gomspace of Denmark to provide launch service with a launch vehicle named LS-1, a project which was canceled and replaced by the Zhuque-1 rocket.

Landspace Technology Corporation is one of several new companies in China aiming to provide commercial launch services to Chinese and international customers, and has attracted around $75 million in funding from China Growth Capital, Goldwind, PGA Venture Partners and others.

Their progress since being founded in 2015 has, along with other similar entities, been accelerated by government policies, support from the State Administration for Science, Technology and Industry for National Defense (SASTIND), which oversees the space sector, and a civil-military integration national strategy which facilitates transfer of restricted technologies from state-owned space and defense contractors to approved firms.

Landspace made the first Chinese private attempt to place a satellite in orbit in October 2018 with its three-stage, solid-propellant Zhuque-1 launch vehicle. The mission ended in failure due to a reaction control system anomaly 402 seconds into the flight.

Competitor OneSpace failed with its first orbital launch March 27. The next private Chinese orbital launch attempt will come from iSpace and its Hyperbola-1 rocket, set for early June.