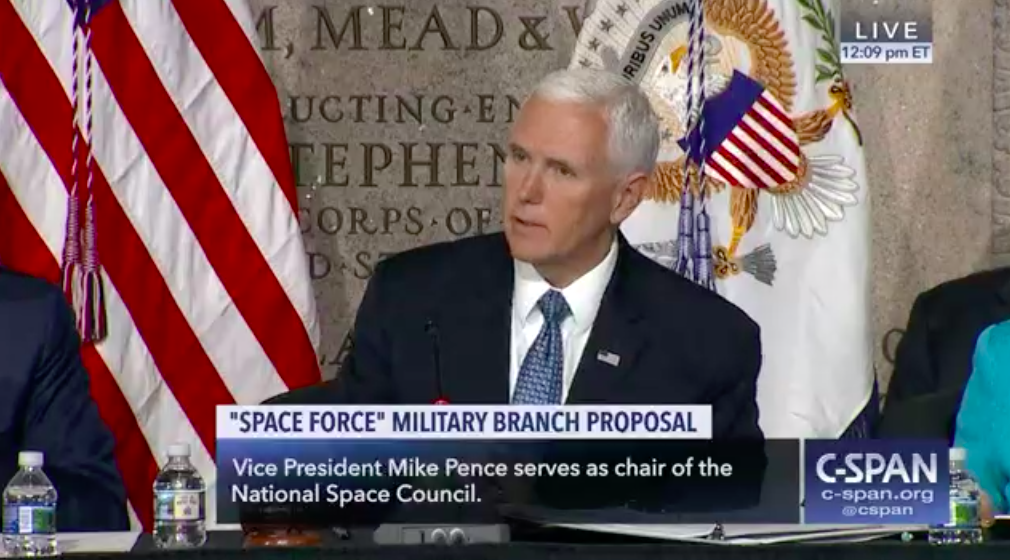 The AFA would have us believe that space professionals are nothing but a cast of supporting characters that don’t merit designation as a military service until they themselves own the bombs.

According to the theory of warfare promulgated by the Air Force Association (AFA), Congress should reject President Trump’s proposal to establish a U.S. Space Force since it cannot apply lethal kinetic force. There is no point, they contend, in having a space service until we are ready to send troops into orbit or deploy weapons from space. Their policy position reflects the view, shared by many, that space is simply a supporting capability — a critical one to be sure — but not one merits its own military service.

I respectfully but emphatically disagree.

Across the joint battlefield, when military forces plan how to prosecute a target, they engage in a tried and true process known by the acronym F2T2EA, or find, fix, track, target, engage and assess. It’s a six-step process that either results in a target’s destruction, or the knowledge that another strike is needed. In World War II, that process tended to be internal. The aircraft or unit that found the target was the one that dropped the bomb and assessed the damage. Even in more recent times, such as the First Gulf War, weapons were deployed by forces in close proximity to the target, even if they were aided by externally gathered imagery or navigation.

But since at least the beginning of this century, each phase of that six-step process has become more and more linked to space, and more and more distant from the individual pushing the button. A Tomahawk cruise missile, a GPS-enabled bomb, an armed Unmanned Air Vehicle, and a long-range guided artillery shell all are fashioned to function most efficiently when space is part of that F2T2EA process. Space imagery, signals collection, and communications to find, fix, and track; space navigation and communications to target and engage; and space imagery and communications to assess. Space is central to the joint targeting process—and without it, the actual munition becomes far less effective, and the operation far more dangerous.

This argument should not be misinterpreted as one that minimizes the skills, training and experience of the professionals in all the military services that carry out their missions. The point here is that in an age of information-based warfare, where the advantage belongs to those that can accurately and quickly integrate the tools of every domain, it’s far from clear that we should focus solely on the uniform of the person pushing the button or dropping the bomb. And yet, that’s what the AFA would have us believe.

They have fashioned an imaginary paradigm where a military service can only be willed into existence when it is individually able to bring kinetic combat power to bear. Not only is that criteria disingenuously fabricated to support a questionable thesis, it ignores basic facts. On today’s battlefield, it’s rare that any military service individually brings deadly force to bear without participation from one or more of the other domains. It’s even rarer when one of those other domains is not space.

In every conflict of this modern era, space forces and space personnel have played an outsized role — enabling the effectiveness, precision and lethality of nearly every U.S. joint force operation. U.S. warfighters around the globe leverage space-provided services and power to achieve military ends that other nations simultaneously envy and fear.

Gen. John Hyten, nominee to be the next Vice Chairman of the Joint Chiefs of Staff, is fond of saying that without space, the U.S. would have to return to industrialized war such as we fought in World War II, Korea, and Vietnam. As Americans, it would be unconscionable for us to ask our troops to fight in such a way. And what separates today’s information-based fighting force from their industrialized counterparts is unequivocally the use of weapon systems created, operated, and protected by space professionals of every stripe – those that conceive, design, and integrate space for the sole benefit of their terrestrial counterparts.

The AFA would have us believe that this team of consummate professionals is nothing but a cast of supporting characters that don’t merit designation as a military service until they themselves own the bombs. That wrongheaded view is unsupported by warfighting experience and is completely dismissive of modern-day military operations. It cannot be simultaneously true that space is the critical link in U.S. warfighting that we all understand it to be, but still not be considered a true combat capability. Yet the AFA would have us believe just that.

What is especially non-sequitur in the AFA’s position is that they clearly endorse the need for a combatant command for space, a U.S. Space Command; but then claim that space can’t be a service because it fails to bring basic combat power – a position which turns on its head the very definition of why we would need a combatant command in the first place.

Perhaps the most disappointing facet of the AFA thesis is that it reflects the same kind of anachronistic thinking that characterized Army criticisms about an Air Force – that air forces could not seize and hold territory and therefore could not be considered a separate service. That was a notion intended to undermine the value of what air power could do by accentuating what it could not. Thankfully, military thinkers and insightful legislators at the time recognized that these were hollow arguments that looked more backward than forward on the character of war and rejected them as a reason to not create the Air Force. The same holds true today.

Paradoxically, the stance taken by the Air Force Association may be the best evidence of why change is needed. In 1947, the Army’s doctrinal adherence to the idea that seizing and holding territory was the essential element of a true fighting force is why separating air from ground was so necessary for the Air Force to flourish.

It is absolutely certain that if they wanted to, space forces could bring kinetic effects from space. But the true power that space brings to the modern battlefield is not measured by the size of its bombs, but by the range and depth of its impact acting in concert with the other three domains. The archaic notion that offensive kinetic power is the single essential ingredient in proving a service’s worth is why space and air doctrine must part ways. And that simple understanding, perhaps more than any other reason, explains why we need a Space Force.