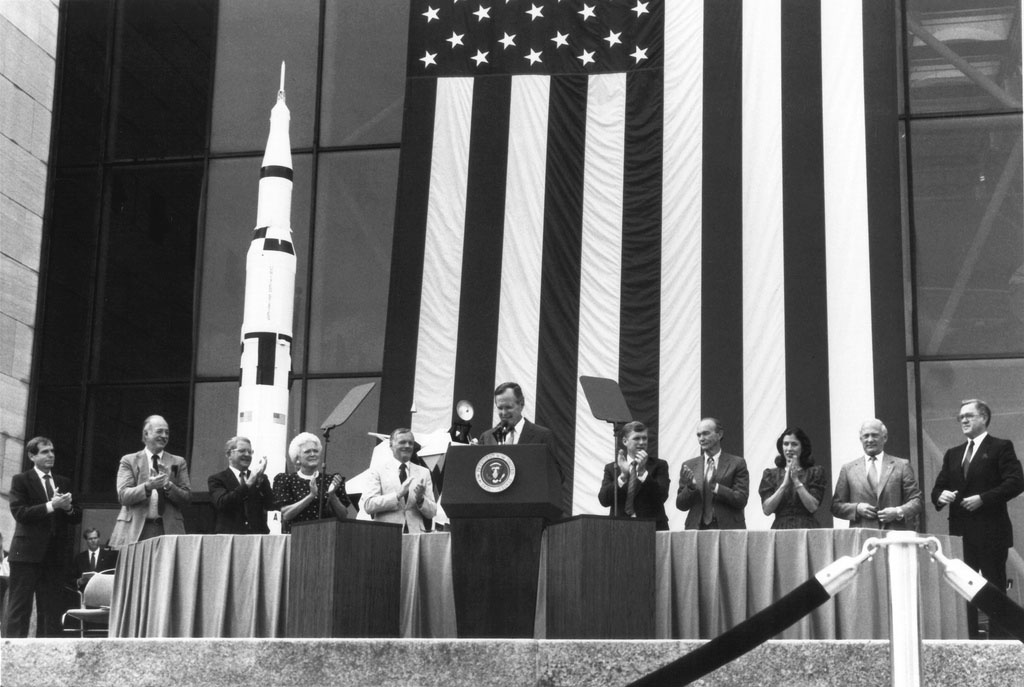 This op-ed originally appeared in the July 16, 2019 special Apollo 11 at 50 issue of SpaceNews magazine.

On July 20, 1989, the 20th anniversary of the Apollo 11 moon landing, President George H.W. Bush got up on the steps of the National Air and Space Museum flanked by Neil Armstrong, Buzz Aldrin, and Michael Collins and declared that in the tradition of their great feat, he was declaring that the United States would now set its sights on returning to the moon by the end of the decade, this time to stay, and then push on to Mars.

The project went nowhere. NASA at that time was interested in selling Space Station Freedom as its next major project, so in its 90 Day Report to the president laying out its plan to allegedly accomplish his goal, it proposed to send crews to the moon using massive spaceships assembled on-orbit at a vastly expanded space station. The plan was so costly and complex that many veterans of the Apollo program who still filled NASA’s ranks at that time could only scratch their heads their heads and wonder, “If we could put a man on the moon, why can’t we put a man on the moon?”

With the return to the moon made impossible by the requirement to expand and then use the space station for on-orbit assembly, the even more convoluted Mars mission design was out of the question. Left with no prospects for attaining meaningful goals within a reasonable schedule and budget, Bush’s Space Exploration Initiative died of congressional sticker shock.

History is now repeating itself. President Trump has declared he wants to send astronauts to the moon by 2024 and then Mars by 2033. But NASA wants to build a lunar orbiting space station, which it ironically calls the “Gateway.” It claims that this facility is a necessity to enable lunar missions. In fact, however, NASA’s plans for the Gateway were laid down before Trump’s lunar initiative, by administrator Bolden, who openly declared that Americans should never return to the moon.

In other words, NASA is saying to Trump the same thing it said to Bush: “You can’t do your program until you do my program.”

Of course, there are excuses. The 26-ton Orion capsule is so heavy that even the long overdue Space Launch System (SLS) heavy lift booster cannot deliver it to low lunar orbit with enough propellant to fly home. So a halfway house is needed that Orion can fly to – thus the Gateway. This is the real reason why the Gateway was invented – to give Orion a place to fly to after NASA’s previous fancy that it could drag a fragment of an asteroid into lunar orbit to provide a plausible rationale for Orion flights was found to be impossible.

But the SpaceX Dragon, which, unlike Orion, has actually flown, only weighs 10 tons. So SLS could readily deliver it to low lunar orbit, as could the already operational Falcon Heavy, which costs about 1/10th as much as an SLS. In either case the Gateway could be eliminated, thereby freeing up the funds to build a lunar lander (which really is necessary if you want to land on the moon.)

So rather than enabling the goal of reaching the moon by 2024, the Gateway project is actually disabling it.

Furthermore, if we develop facilities on the surface, rather than in orbit, we can make use of hydrogen/oxygen propellant derived from lunar ice to implement a much more efficient moon base operation, which would not only allow far more extensive lunar exploration, but free up our heavy lift capability to take on new challenges further out in space.

This brings us to the subject of human missions to Mars.

As noted, administrator Bolden was an opponent of human missions to the moon, so he could not justify the Gateway with that rationalization. Instead, he argued (as he had previously done on the equally-nonsensical asteroid redirect mission,) that it was necessary to enable human missions to Mars. Acting consistently with this conceit, NASA created a putative design for a human Mars mission that would utilize the Gateway to support the operations of an interplanetary spaceship it called the Deep Space Transport (DST). This system would use immense solar electric propulsion (EP) ion drive system to travel from the Gateway to Mars and back, with one-way trip times of 300 days. This contrasts poorly with what chemical rockets can already do, as demonstrated by the Spirit, Opportunity and Insight missions, which reached Mars in 180 days starting from low Earth orbit (LEO. If it had to start from LEO, the Deep Space Transport would take 600 days to reach Mars. The Gateway was therefore justified by baselining the wrong propulsion technology, which while bad using the Gateway, would be even more catastrophic without it.)

Furthermore, if a spacecraft were at the Gateway, it could get to Mars using chemical propulsion using less propellant than EP, despite EP’s much-touted higher exhaust velocity, because the trajectories the two systems would take are different, with amount of pushing an electric propulsion spacecraft needs to reach Mars from the Gateway being 10 times that required by a chemical rocket (a velocity change of 7 km/s vs 0.7 km/s.) But in addition the EP spaceship needs to carry a huge 500 kilowatt electrical power system to drive its engines, while the chemical rocket propelled vessel only needs 10 kilowatts for life support. So if it ever actually implemented the futuristic DST, NASA would create a system which would get astronauts to Mars in twice the time, with twice the hardware mass, twice the propellant mass, a much higher development cost, and a much more complex mission plan than could be achieved using currently available off-the-shelf chemical rockets.

As if that weren’t enough, the DST uses xenon propellant, which is not obtainable from the moon, as opposed to the oxygen/ hydrogen propellant used by a chemical rocket which conceivably could be. So the choice of using the unnecessary, slow, costly, complex and mission-bloating DST for Mars missions completely negates any hope that the lunar base could ever play a useful role in support the human exploration of the Red Planet.

But NASA needs the DST to justify to Gateway, because the Gateway is necessary to enable the DST. It may be nuts, but that’s their story and they’re sticking with it.

There is a clear alternative to such logrolling, which is the Mars Direct plan, or plans like it , which use the upper stage of a heavy lift rocket – such as Falcon Heavy, Starship or SLS – throw necessary payloads on direct trajectories to Mars, with return methane/oxygen propellant produced in advance of the crew’s arrival from Martian water and CO2.

We don’t need fantastical science fiction spaceships based at a lunar orbiting space station to enable human Mars exploration. What we do need is a heavy lander, with a payload capacity in the 20 ton range. With a proper upper stage, SLS could throw around 40 tons on trans-Mars injection, as could SpaceX’s planned Starship system. This is enough to deliver a 20-ton payload capacity lander to Mars. The human Mars exploration program could then begin by exercising such a system to deliver platoons of rovers, armed with diverse instruments and tools to thoroughly explore regions of interest, demonstrate in-situ resource utilization systems, and ultimately prepare a base. The rover platoon could also photograph their region in high definition, allowing the creation of a virtual reality simulacrum to allow thousands of people on Earth to explore alongside the rovers, (“Hey rover, this rock looks interesting. I think it could be a fossil. Come here and brush off the dust so we can have a better look.”) testing out methods of Earth-Mars combined operations in advance of their use in support of astronauts. Such missions would produce an immense scientific return, while taking down the key tall pole blocking the way to human Mars exploration.

Such is the choice before us.

Robert Zubrin, an aerospace engineer, is the founder of the Mars Society and the president of Pioneer Astronautics. His latest book, “The Case for Space: How the Revolution in Spaceflight Opens Up a Future of Limitless Possibility,” was recently published by Prometheus Books.