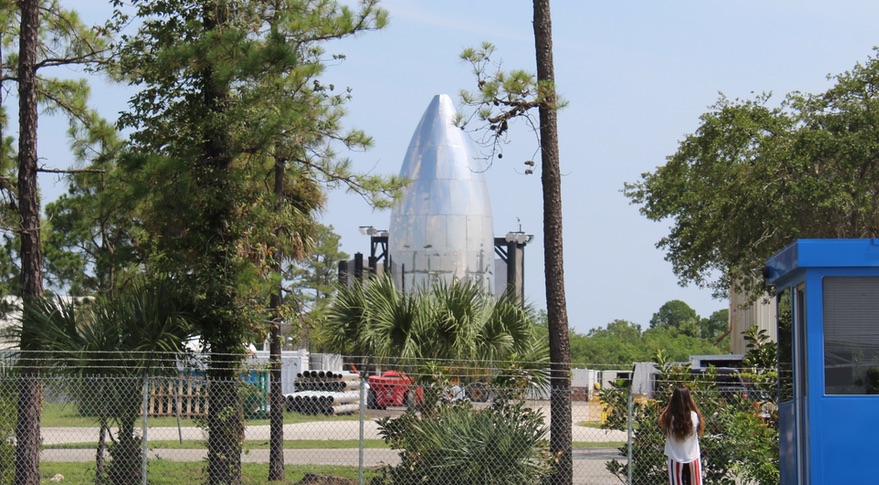 In a series of late-night tweets, Musk, the founder and chief executive of SpaceX, said the “Starhopper” vehicle SpaceX is assembling at its test site near Brownsville, Texas, will make its first hop on July 16, now that the company has installed a Raptor engine in the vehicle.

~20m up & sideways for first flight. Mk1 Starship hopefully 20km up in a few months.

Musk said that, on the upcoming test, the vehicle will go about 20 meters “up and sideways” before landing. The company plans, over time, to expand the flight envelope using that vehicle and another prototype. “Mk1 Starship hopefully 20km up in a few months,” Musk said.

The upcoming test will be the first free flight of Starhopper, although the vehicle performed several tests in April, including one where it briefly rose slightly off the ground but remained tethered to its launch pad. SpaceX expected to start free flying tests of the vehicle in June, but issues in the development of the testing of the Raptor engine, involving an apparent mechanical problem with part of the engine’s turbomachinery, delayed the flights.

The Texas vehicle is one of two Starship prototypes under construction. A second vehicle is being built in Cocoa, Florida, near Cape Canaveral, but the company hasn’t stated when that vehicle will begin testing. The two teams are working independently, Musk has previously said, but are required to share insights with one another.

SpaceX ultimately intends Starship to be the reusable upper stage of a next-generation launch vehicle, launched atop a large booster called Super Heavy. That combined system, Musk said, will be able to place 100 to 125 metric tons of “true useful load to useful orbit,” such as the company’s Starlink broadband communications satellites, and then return to Earth. He noted that works out to 30 to 40 metric tons to a geostationary transfer orbit.

Musk also suggested he will provide an update on development of Starship, and potential changes in its design, in late July. Musk previously said he would give a presentation on the system once the company started flying the Starship prototype.